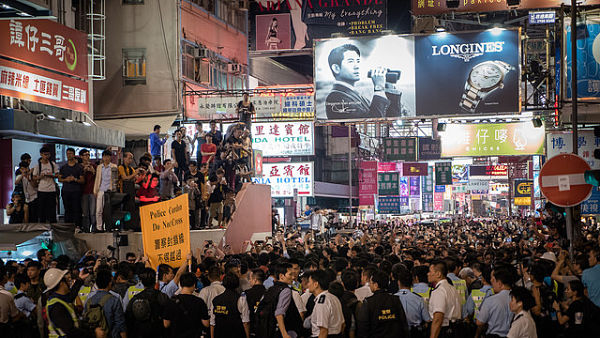 Tin-yuet Ting from Hong Kong interviewed those who took part in recent protests over democratic crises in Hong Kong.(Photo: Studio Incendo/Flickr/CC BY 2,0)

It is generally accepted that it is difficult to be a young person in these less than certain times. But the challenges that face teenagers and young adults are even more demanding in those many contexts around the world that are especially troubled and crisis-ridden. They are even more likely, than the adult, established population, to experience marginalization, gender and ethnic bias and to be politically radicalized. As a consequence, there is an increased risk of their involvement in extremism and related violence. Indeed, most violence is perpetrated by people (usually but not always men) in their late teens or early 20s, whether it is murder of a partner or associate or an act of terrorism.

In an exploration of the complex dynamics of youth in especially challenging situations around the world, Charalmabos Tsekeris and Lilu Stylianoudi from the Academy of Athens have brought together, for the current issue of Contemporary Social Science, 15 contributions. They cover studies in countries as varied as Israel and India, Hong Kong and Kuwait, Botswana and Brazil. Each of these papers throws a different light on the impact of destabilising circumstances and how youths cope with them.

The surprising findings throughout these papers is how well young people manage with extremely difficult situations, how resilient they are. They typically have a remarkable ability to adapt and deal with adversity. This is illustrated, for example, in the work of Daniel Sawesew and his colleagues from the University of Bamberg in Germany. They managed to get 300 orphaned adolescents in Dessie, Ethiopia, to complete self-report questionnaires. The results indicated that the key to their resilience was the support of their peers, especially for girls, and to a lesser extent their guardians. Despite the recurrent catastrophes of war, drought and HIV/AIDS the social support systems helped these teenagers to have positive self-esteem and sense of a meaningful life.

The positive impact of social support from family and friend contrasts with the potential for damage that can be caused by institutional processes. This is illustrated by Roxana Cavalcanti, from London’s University of Westminster, in her study in Recife in northeast Brazil, where the inappropriate introduction of policing methods had far more negative consequences than the authorities appreciated. She reports that the effects of attempts to reduce endemic violence by much more interventionist law-enforcement were limited and short-term. The process converted young people living in the area from being victims to being suspects and perpetrators. Youths were criminalised and exposed to much more violence.

The challenge of coping with debilitating circumstances is also illustrated in the study carried out at the height of the recent recession in Turin by Lara Monticelli and Simone Baglioni from Pisa and Glasgow, respectively. Their interviewees were mainly in their 20s, unemployed or in a precarious situation moving between part-time and/or intermittent occupations. The lack of regular employment not only excluded them from the ability to own the consumerist symbols so significant in modern society, but also reduced their ability for social engagement. Their hazardous situation therefore put them in a vicious cycle that increases social exclusion from one generation to the next.

Nonetheless, the authors of the Turin study offer the optimistic note that whilst their interviewees felt powerless they were striving to maintain their agency. So although this is not currently manifested in any form of public stance it does seem possible that a collective voice is emerging that will have political influence, as has been the case in other places.

An example of the political activism that disaffected youths express was studied by Tin-yuet Ting from the Hong Kong Polytechnic University, who interviewed those who took part in recent protests over democratic crises in Hong Kong. He shows that such political activity is not a passive reaction to current repression. Rather, those he spoke to expressed a desire for an imagined future that related to their own identities and their own role in transforming society. This emphasizes the importance of how young people see their future, not just their concerns with the present.

In Kuwait the turn away by young people from conventional political activity is rather different from that in Hong Kong. This is revealed by Emanuela Buscemi from the University of Aberdeeen in her review of how Kuwaiti youths deal with the conflicting demands of a liberal modernity, an unprecedented economic crisis and a repressive autocratic regime. She argues that access to social media helps to avoid state censorship and provides a forum for mobilizing protests as well as channelling extremist propaganda. This offers a foundation for different forms activism. Some of this is expressed in political campaigns, but other aspects draw on Islamic extremism with associated violence. Yet, a further more productive route is through civic engagement, such as urban projects, art collectives and itinerant markets. The image of alienated youngsters, passively avoiding contact with social issues is not supported by this study, but does show that there are pathways to both positive and negative engagement when people in their late teens and early twenties seek to have an influence on their futures.

Two aspects to the 15 studies in this issue of Contemporary Social Science are particularly noteworthy. One is the outreach to many different places around the world by researchers based in Western universities. Social scientists in Britain, Germany and other developed European countries have their sights far beyond the day to day concerns of their host nations. Rather like the comment that travelling mainly assists the understanding of one’s own country. These researches show that the experiences of young people are a distillation of the traumas and challenges that their society faces. Understanding those experiences and how they are coped with help to make sense of all societies. Young people may be regarded as similar to the historical canaries in coal mines that were more sensitive to danger than the miners who worked there. The challenges youngsters face are microcosm of the stresses and strains of the social contexts in which they live.