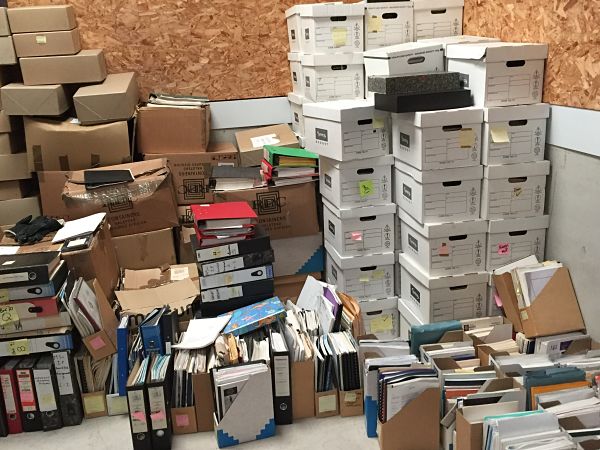 What is the measure of a man? There are various emetics, but here’s one … Photo: David Canter)

Having recently enjoyed voluntary severance from my academic post (less troubling than my vasectomy), after half a century as an academic, I was asked by my severed university to remove the archive I had collected over those years. More than half of that time and the great majority of that archive related to my activities as an applied social psychologist and for the last 30 years as a crime psychologist (mistakenly thought of as merely a ‘profiler’). Two universities already have some small archives from me and it occurred to me that they or others may be interested in some of the stored material. I certainly have no room for it or the capability of making it available in any organised way on a long-term basis. I suspect this is a challenge many academics face on retirement?

But before others could access it I needed to sort it out. As they used to say before interactive books, this is where the story really begins. The material fills at least three large removal vans. Apparently three-archivists spent eighteen months sorting it all out. However, it then got shuffled up as the university decided it did not have room for it. They shoved it all into a small store room, such that the door would only just open. I was reminded of the wonderful closing scene in an early novel by Martin Edwards, Yesterday’s Papers, where the villain is killed by storage cabinets falling on top of him.

I have therefore set about moving the material to a cold, fluorescent-lit lock-up. The sort where criminals keep their stolen goods, and millennials living in single rooms store their winter clothing. This is enabling me to start organizing it and throwing out what I guess no-one will have any use for. This is being a most salutary experience.

Why I asked myself did I keep the completed questionnaires filled in by street sex workers about their experiences? Why are  copies of the rather arcane journal Homicide Studies still in their plastic wrappers that I’ve clearly never looked at? There is correspondence on various cases that I’ve been asked to contribute to, mostly from defense lawyers. Many I declined as not being in my area of competence (a nicety I wish more of my colleagues would embrace). There are copies of the original ‘profiles’ I wrote in the days before I felt the need to put the word in quotation marks. And then there is, what we call in the scientific trade, data. Pages of maps of where crimes have occurred or esoteric print-outs from police forces of their crime records. The meaning of the codes they are covered in now lost to modern civilization. There are also some files that the archivists just labelled as ‘sensitive material.’ I won’t know what that is until those boxes surface in my searches. The new laws on the privacy of personal information, sweeping across Europe, make the storage and any use of this material without strong documentary evidence that it has been approved by those named makes secure destruction of this essential, despite the potential for future research. I am reminded of an ethics committee saying I could not study anonymous offensive letters without the permission of the people who wrote them!

Meditating on all this and why I kept it, I’ve realized that it was not stored as some sort of memento of past deeds of derring-do. I kept it because I thought, as many researchers do, “Ah, one day I (or someone) could make use of that.”  It dawned on me that the storage was being used as a bulwark against mortality. It suggested a future with which I could engage. I was defining myself in terms of the possible actions I could one day take. It seems very possible that many people store for these reasons?

I was using my archive to define myself.  There is growing research on the importance of objects as significant emotional entities. But that research is almost entirely about the memories they invoke. Certainly, colleagues have said they do not want to divest themselves of the books on their shelves because each book reminds them of some important events in their lives. However, my meditation on the vast piles of reports, books and papers that I have amassed suggests to me that this historical perspective ignores the teleological nature of the human spirit. Much of this material was kept because I thought it and I would have a future. Some of it might, I suppose, but much of it will not.

The post Archive, Therefore I Am appeared first on Social Science Space.

Archive, Therefore I Am